Puerto Rican dining; from the sublime to the ridiculous

If you are planning a trip to Puerto Rico, make a reservation for dinner at Marmalade in Old San Juan before you go. Better yet, make a reservation now, and then plan a trip around it. Reservations can be difficult to get, but a colleague of my father-in-law’s was able to secure one for us in exchange for whatever it is that a chef could want from a chemist with a Nobel prize.

Now, I’m not a foodie, and as such it’s possible that I’m being overly enthusiastic about this restaurant, but the family members who shared this meal were equally effusive. The setting was what I would call elegant chic. I borrowed a photo from the Internet to illustrate, below; it doesn’t do the restaurant justice, but you get the idea. 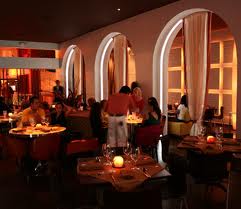 And the service was spectacular. We hadn’t been seated more than a few minutes when the chef-owner appeared at our table. We knew that’s who he was because he was wearing a white chef’s jacket with his name stitched on it, Peter Schintler. He welcomed us and said, “I understand that one of your party has a gluten allergy.” Normally, that would cause said party member (my daughter, Hannah) to recoil in horror, but not this time. Chef Peter charmed her (and the rest of us) immediately, assuring her that he was going to cater to her with special dishes. Hannah’s meal was a gluten-free Cinderella story; she was treated like a princess – and she loved it. And she wasn’t the only one. We all ate like royalty.

The appetizers we shared, of which there were at least half a dozen, were all to-die-for. My favorite was a hand rolled, black truffle, tagliatelle pasta. I don’t remember ever having tasted a truffle before, but it instantly became my favorite flavor in the world, reinforced by a serving of the chef’s signature dish, an espresso cup of white bean soup, scallions, black truffle oil and pancetta. The cup was too small to lick clean, but believe me, I tried.

All the entrees were fabulous, judging by the fact that not a speck was left on anyone’s plate. And then came desert, which was served the way the appetizers were; there were many of them and we shared them all. It was the adult equivalent of being a kid in a candy store.

Ironically, the night before, we’d eaten at PK2, a Peruvian restaurant a few blocks from Ocean Park, where the experience was at the opposite end of the taste and service spectrum. We were greeted with the announcement that “the system was down,” and they could only take cash. We agreed that we would be able to pay for our meal the old-fashioned way, and then waited half an hour before the first entrée emerged from the kitchen. A few minutes later we had all been served—except for Hannah. Her uncle and I, the two diners closest to her, refrained from eating in solidarity and waited with her for another half hour. In the end, my dish was not only lukewarm, but way too salty, and hers was just blecch.

After we settled the bill, I demanded to know why my poor daughter had had to wait so long for her meal. The answer, in short, was that they’d run out of supplies and had to go buy more in order to complete her dish.

So that’s dining in Puerto Rico, from the sublime to the ridiculous.