1995 was a long time ago, before my daughter was born. It’s remarkable only as the year I had a miscarriage, which isn’t a small thing, but turned out to be a very good thing. I hadn’t really come to terms with the idea of having a baby when I got pregnant the first time, so I was more than a little conflicted about the news. I confess that I was ultimately relieved when the drama of the situation was resolved, and a few months later, when I found out I was pregnant again, I was thrilled. I rarely think about the miscarriage. It moved into the past and became a memory, like so many other things that happen in our lives.

Lately, I’ve been indulging in one of my favorite pastimes, throwing things out at my mother’s house. I’m not being cruel; my parents are fully on board. We pick a cabinet, or a drawer, and go through it, tossing out old bank statements and assorted papers from decades long past. Mom bought a shredder to help with the paper purging and it’s been a boon to our efforts. Unfortunately, you can’t shred frozen food.

When we decided to clean out the freezer, we ended up with two huge plastic bags for the garbage. It was astonishing to see how much that freezer could hold. In my house, we have a traditional refrigerator with a small freezer compartment on the top. Mom’s refrigerator has side-by-side doors and the left side is all freezer. We started at the top shelf where the ice cream and dessert things live. Ice cream gets turned around fairly quickly in their house, but the cookie dough she had purchased to support a high school soccer team several years ago had to go.

The next shelf had frozen vegetables; most of which went the way of the cookie dough. The freezer is so deep that it’s hard to tell what’s in it. I don’t blame her for thinking she needed peas—every time she went to the supermarket. Once something was put in front of the most recent bag of peas, like whole cranberries for a Thanksgiving project that never came to fruition, it receded from memory. Really, I understand how that happens. It was the next shelf that was truly fascinating.

The first package of meat I pulled out was steak from 2010. I was shocked. My mother, slightly embarrassed, argued that it was probably still good, because after all, it had been frozen. I disagreed and out it went. Next up was hamburger meat from 2005. She allowed as how that was, perhaps, a bit over the line and didn’t argue when I tossed it. Next up was chicken dated 1998. By now we had moved on from shock and awe to gleeful laughter. But we weren’t done yet. The pièce de résistance was a whole chicken from—1995.

That whole, frozen, chicken was older than my now seventeen-year-old daughter. And she’s not the only thing that came into our lives after that chicken. My sister produced another grandchild; we bought a new house; presidents came and went. The world turned and things happened; good things and bad things, funny things and sad things. And most of them are now distant memories. Our family has been under a lot of stress recently. We look forward to the day when our memories of this time will dim. In the meantime, that chicken provided us with a much needed laugh; a funny memory we’ll be happy to keep alive.

My gift-giving history has some people wondering if I’m trying to kill my husband. For his thirtieth birthday I gave him a ride in a hot air balloon. When he turned forty I arranged for him to go sky-diving. Last year I sent him up in a bi-plane. You know, the kind of old-fashioned plane that has no ceiling and the pilot sits behind you. The kind where, theoretically, the pilot could flip the plane upside down and the only thing between you and disaster would be the worn leather straps crossed over your chest. 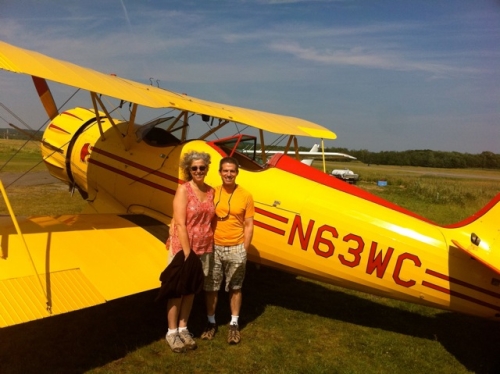 There were some sharp intakes of breath when the family heard about the hot air balloon ride, but most thought floating over the countryside sounded romantic. They were much more nervous about the idea of sky diving and one aunt made it very clear that she thought I was being downright irresponsible. Despite her fears, he made it up, and down, in one piece. 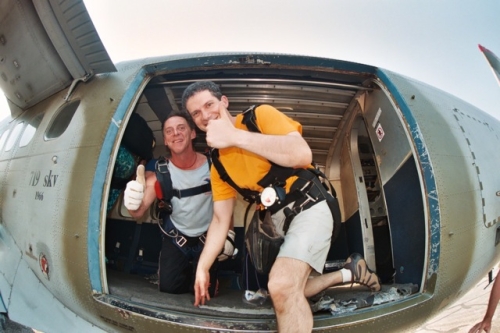 In any case, I am most emphatically not trying to kill my husband. He likes to be up in the air, and I like to give experiential gifts, particularly for significant birthdays that end in zero, that leave him with memories. Dementia aside, memories last forever. Tangible things go in and out of vogue; they break, wither or fade; or are too expensive to contemplate in the first place.

(If you read my blog regularly, you may be getting tired of reading about presents, but this is a big year for significant birthdays in my family, and they’ve been on my mind a lot lately. I promise, after this, no more gift posts.)

My sister told me flat out that she wasn’t interested in jumping out of a plane ─ I wasn’t even going to suggest it! ─ and my sister-in-law suggested I curb my Fear Factor urges for her husband’s upcoming birthday. Apparently I’ve developed somewhat of a reputation for giving gifts that leave people feeling that they’re living on the edge. And maybe I do, but isn’t it more memorable if your heart rate goes up a bit?

I can provide earthbound experiences as well; a trip to a day spa; a B&B in Maine. I’m dying to give someone the opportunity to swim with a Beluga whale at the Mystic Aquarium. What an experience that would be! Who wouldn’t love that?

As it happens, one of the upcoming honorees is a homebody who wants nothing more than to let the significant birthday slide by unobserved, no hot air balloons, no field trips, no Beluga whales. I’ve been pondering this problem for a while now and have concluded that in this particular case, the best way to remember a significant birthday might be to pretend it never happened. But there is a helicopter tour of Newport that looks awfully inviting…