Today, I turned to my writer’s block for inspiration. That sounds like an oxymoron, I know, but this writer’s block is a small, squat book called The Writer’s Block: 786 Ideas to Jump-start Your Imagination. 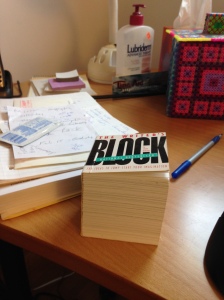 I rarely resort to using a prompt; it hurts my pride. But the weekly blog I’ve written for the past five years has fallen off to monthly of late and I’m starting to panic. If I’ve run out of interesting things to share, maybe I shouldn’t be blogging at all. At least, that’s what my mean-spirited internal naysayer would have me believe. My more charitable internal cheerleader reminds me that I’ve been so busy lately working on my manuscript that of course my blog posts have suffered. I’m grateful that the cheerleader can take the naysayer in a fair fight, but it doesn’t really change the fact that I’m coming up empty. And so I close my eyes and open the block.

In addition to prompts, which they call “spark words,” the block has short stories, advice and photos. The first page I open to is an advice piece called, “Write Naked,” something Victor Hugo apparently used to do. I shudder and flip to a different page. This time I land on the prompt, HEIST. I groan. Since I have never robbed a bank, or participated in any Ocean’s Eleven– (or Twelve- or Thirteen-) style activity, this is not a spark that will ignite a personal anecdote. (It did cause me to wander off to look at Mohegan Sun’s website, but that was a delaying tactic which is not at all what I’m after here.)

Writers have their own unique processes; what works for one may be stifling for another. It would be logical, then, to assume that there is no right way to use prompts. But I think there should be one basic rule: when you resort to looking for a prompt, you should use the one you stumble on first. The alternative is to reject the prompt and look at another one, and so on, and so on. When you allow yourself the luxury to hunt for an appealing prompt, you’ve defeated the purpose of the whole thing. You might as well use all that time to think about something you’d really like to write about, which leaves me with HEIST.

The last time I gave in to the urge to write about not having anything to write about was in May of 2011, in a post called Writing Prompt. In the end, it wasn’t about that at all. I hoped that this piece would also take an interesting turn near the end and I would be able to salvage an otherwise mundane offering with a soupçon of insight. I’m afraid, however, that will not happen here. (Ouch! My internal naysayer just decked my internal cheerleader.) Instead, I will spend the next few days thinking about ways to incorporate the word HEIST into my life. Perhaps my next post will be from jail. TTFN.

Red Cross: you donate, they sell

Did you know that the Red Cross sells blood? I didn’t.

I was talking to a Haitian friend of mine about charitable contributions and I mentioned that my husband and I make annual donations to the Red Cross. She gave me an earful about how after the earthquake in Haiti in 2010, the money that was supposed to arrive from the Red Cross – didn’t. The very next day, a childhood friend of mine, Stephen Engelberg, Editor-in-Chief of the independent, non-profit, news outlet, ProPublica, alerted me to this article: The Red Cross CEO Has Been Serially Misleading About Where Donors’ Dollars Are Going.

It said, in part, “Most of what the Red Cross does is take donated blood and sell it to health care providers. Of the more than $3 billion that the Red Cross spent last year, two-thirds was spent not on disaster relief but rather on the group’s blood business.” Come again? The Red Cross sells blood? And it uses the money that unsuspecting do-gooders donate to pay wages and benefits to the people who manage the business? I’m shocked! And I’m not saying that with my Jon Stewart voice: I really am shocked.

I visited the American Red Cross website to educate myself. If selling blood is big business, it can’t be too hard to find out about, right? Well you’re not going to hear about it from the Red Cross. There is zero indication on their web site that they sell blood. As a matter of fact, the page that has their mission statement clearly says, “The Red Cross is a voluntary relief movement not prompted in any manner by desire for gain.” I’m confused. If that’s the case, how come they’re selling blood?

Still feeling foolish, I kept exploring and came up with this article, The Business of Blood, from 2006 on Slate. That article explains the trail of blood. It also says, “The system of blood distribution hasn’t always relied on volunteer donors. Until the 1970s, a major portion of the nation’s blood supply came from paid donors. But a government study found that volunteered blood was much less prone to hepatitis contamination. From then on, blood banks had to label their packages “paid” or “volunteer,” which had the effect of eliminating paid-donor blood from the national supply.” So, it’s our collective fault that people are donating blood, out of the goodness of their hearts (and circulatory systems), that other people then sell?

Perhaps this is not news to you. Maybe you saw the article in a July, 2012, issue of Forbes, The Guys Who Trade Your Blood For Profit, that outlined the difficulties a startup blood distributor had competing with the American Red Cross. And maybe the scandal about where donor’s dollars are going isn’t a surprise either, because you saw the article on HuffingtonPost.com in January, 2012, Red Cross Responds To Documentary’s Charges Of Haiti Aid Failure. But I had no idea, and now I feel like a child who just found out that the tooth fairy isn’t real.