You may not know

The apartment was a studio, with an alcove just big enough for a queen-sized bed. The main living space was taken up by a large leather sofa and an equally large Doberman Pinscher named Freda. There was a desk catty-cornered to the sofa and behind that, a mattress on the floor. The name on the lease was Ronnie D. He lived there with his girlfriend, Judy, Freda, and his brother, Larry, my boyfriend.

During my late teens and early twenties, I spent a lot of time visiting that crowded apartment. Ronnie was older than Larry by enough years that he went to Vietnam and Larry stayed home. I was eight years younger than Larry. Since there was already a Judy at 525 Beacon Street, I became Little Judy. Big Judy worked in reservations for Delta Airlines. She gave me an over-sized coffee mug imprinted with the Delta logo and my nickname.

I was exceedingly fond of both Ronnie and Judy, in spite of the fact (or perhaps because of it) that they had personal histories of which I was only vaguely aware. For instance, I knew Judy had children that lived with her mother, but not why. And while Ronnie never spoke about Vietnam, his circle of friends seemed to be mainly veterans.

Eventually, Larry and I broke up. He married someone else and started a family. Time marched on and I lost touch with Ronnie and Judy. Many years later, in 2011, married, with a daughter of my own, I stumbled across Ronnie on Facebook. I messaged him and asked after Judy. He responded, “Sadly, Judy lost her 10 year-long battle with cancer in 2004.” She’d been gone for seven years and I hadn’t known. How was that possible? And why hadn’t Larry contacted me when she died? I was bereft.

When I thought about my time at 525, I’d picture all of us as we were then: everyone on the leather sofa, Freda with her head on Ronnie’s knee, Big Judy with her legs curled up under her as she drank tea. It was a shock to realize that I had been remembering happy times, ignorant of the pain Judy had suffered and the loss I had yet to experience.

I always check the obituaries in the Boston Globe. I look to see who passed away in the town I live in, and the one I grew up in. If I have time, I’ll scan the photos, stopping to read about someone who looks too young to have died. Sometimes a name I recognize will pop out. That was how I found out, at the tail end of 2012, that Ron had passed away, too.

There was a memorial for him at a funeral home, but he wasn’t there. It was winter and his remains were to be buried in the Massachusetts National Cemetery in Bourne. I scolded Larry for not calling me and reminded him that I wanted to know when people from our shared past died. He shrugged and allowed as how he just wasn’t very good at that sort of thing. I hope his wife will prove better at it when the time comes.

Every couple of weeks, I use my Little Judy mug for my morning coffee and think about Ronnie and Judy. I wonder how many people from my past are gone, and if there’s any way to prepare for the inevitable feelings of loss. I hope Big Judy remembered me fondly from time to time, even without a mug to remind her.

When the lights went out, we watched Bozo the Clown shrink to a tiny dot on the television before he disappeared entirely. It was early November, 1965, and a power glitch in Canada had thrown much of the Northeast off the grid. 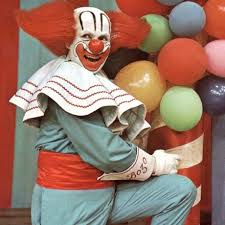 I was seven, home alone with my four-year-old sister. It was early evening and we could see perfectly well by the light that came in from outside. Nonetheless, perhaps knowing that the sun was setting and fearing worse to come, I was frozen to my spot on the sofa.

I sent my sister out to the kitchen to find a flashlight and she dutifully trotted off. Soothed by its presence, however unnecessary, I was able to follow her back to the kitchen where we stood at the open door to wait for my mother to return.

While my initial response to the power outage was debilitating, I have a warm, visceral memory of the sky that night. It was beautiful; dusky pink and vast. I imagine the scene as a filmmaker might: two little girls holding hands, staring at the sky, as the camera pulls back and frames them in the doorway.

The upset I experienced that night was real, but I recall it in an abstract way. When I tell the story, I don’t relive the feeling.

There was another time, as an adult, that I responded to fear by freezing.

My husband grew up reading Babar the elephant books and always envisioned flying off in a hot air balloon with his own Celeste. It was never a fantasy of mine, but when I gave him a hot air balloon ride as a birthday present it was understood that I would play the part of Celeste.

Hot air balloons typically fly at dawn or dusk. I booked our outing for an early morning, in Rhode Island. I was a bit nervous, but nothing unusual given that anxiety precedes me everywhere. And my husband’s excitement was so palpable that it distracted me from my own misgivings.

We watched the crew lay the balloon out on the ground, attach it to the basket, and inflate it with air. When it was suitably robust, they turned the burner on to heat the air and slowly it rose, pulling the basket upright. We clambered in, the pilot shot more flame into the balloon, and up we went.

I immediately regretted agreeing to participate. The further away the ground got, the whiter my knuckles. My husband tried to put his arm around me and I hissed, “Don’t touch me,” convinced that any movement, however slight, would send me hurtling to my death.

After a while, when the cars were as small as they were going to get and we had floated along without incident, I began to breathe. I even relaxed enough to turn my head to marvel at the beauty of the scenery.

We have lots of photographic evidence of that outing, and in many of the pictures I’m smiling. I also remember that after we landed and scrambled out of our wicker conveyance, I was giddy with exhilaration. But for all that, my strongest emotional memory of that day is not my awe at the wonder of it all, but how terrified I was as the balloon lifted into the air.

So why do some emotions live on in memory while others don’t? Perhaps when I was a child, even though I was scared, I knew I wasn’t in mortal danger from the power failure. There have, however, been deadly hot air balloon accidents, so that particular fear was not, in fact, entirely unfounded.