Laurie and Max met at Goodwill where they sorted rags for minimum wage. Both had severe developmental disabilities and Max was legally blind. Though they were in their thirties, they asked for, and received, their parents’ blessings to be married, and set up housekeeping in a one-bedroom apartment on Turner Road. They were a good team and were often seen hand-in-hand walking to the bus, or to visit the goats at a small farm down the street. There was only one thing missing in their world. Laurie desperately wanted a baby, but despite the desire and the prayers, they still didn’t have one.

One gray, Saturday morning, Laurie walked to the grocery store and came home with a baby. Max was confused, but delighted, even though Laurie had neglected to bring home the cereal and milk that she’d gone to the store to get. Nor did she have diapers or formula or even a bottle to feed the baby with, so they agreed that Max would go out and Laurie would stay home with the baby, who had been remarkably quiet the entire time.

Max carefully wrote down all the things he needed to buy, adding in a tiny scribble at the bottom, cookies. He was supposed to be on a diet and didn’t want Laurie to know that he was cheating.

“Little diapers are big, too,” she said, rolling her eyes. “Take the wheely.” 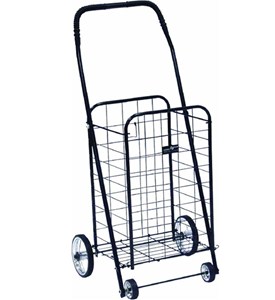 Max didn’t understand, but he was used to that, and to doing what Laurie said, so he dragged the collapsed, wheeled grocery cart out of the closet and bumped it down the stairs behind him. He stood on the threshold for a moment, studying the sky. It was pretty when it was overcast, and it didn’t hurt his eyes to look at it, like it did when the sun was out. He pried opened the cart so it became a tall wire rectangle, and pulled it down the street. When he got to the corner, he stopped and looked both ways.

A couple of blocks further down the road, in front of the grocery store, he could see flashing blue lights, lots of them. There must be something interesting happening for there to be more than one police car and Max was eager to see so he moved a little faster. But he didn’t run, because that could be dangerous. As he neared the store, a policeman held up his hand in the stop position. Max could now see that there were four police cars and an ambulance and a fire engine.

“Is there a fire?” he asked the policeman.

“What does that mean?”

“It means,” said the policeman patiently, “that a woman had a baby, decided she didn’t want it, and tossed it into a dumpster behind the supermarket.”

Max nibbled on his lower lip. “Can I go into the store?” he asked.

“Not right now. We’re trying to find the baby, but it’s not where the lady said she put it. This shouldn’t take long, though, and then you’ll be able to go in.” He turned around and put his hands on his hips, one resting lightly on the butt of the gun in the belt full of cool things that he wore.

It was strange, Max thought, that on the same day Laurie brought home a baby, there was one missing from a dumpster. Why would a lady not want a baby? And why wouldn’t she give it to someone who wanted it instead of throwing it away? That wasn’t good. Max was diligent about recycling, reusing, and reducing, except maybe that last part. He decided he wouldn’t get the cookies after all.

Making decisions was hard. Max wasn’t sure if he should wait for the policeman to let him go into the store, or walk home and try again later. If he wasn’t going to get cookies, maybe he didn’t need to go in at all. What was he supposed to buy? He dug the list out of his back pocket and remembered, oh yeah, cereal, milk, diapers, and formula to feed the baby.

Laurie brought a baby home from the supermarket, where some lady had “dumped” her baby.

“Excuse me,” he said, reaching out to touch the policeman’s arm.

Without turning around the policeman said, “Not yet.”

“I have a different question,” Max said.

The policeman sighed, turned around and raised an eyebrow. Max knew that meant he could ask his question.

“Does the lady want her baby back?”

The policeman snorted. “That woman is not getting that baby back. She’ll be lucky if she doesn’t end up in jail.”

He decided that he didn’t want to wait on the sidewalk anymore so he turned around and pushed his cart home again.