The meaning of meme

The world moves at a dizzying pace (although sometimes I get dizzy when I get out of bed too quickly, so maybe it’s just me). Nowhere is this speed more evident than on the internet, where words have to be invented to keep up with new phenomena. One such word is meme. It’s not really a new word anymore (in internet or dog years), but it may be new to some of you. According to squidoo.com, “An internet phenomenon or a meme is an image, video, phrase or simply an idea that spreads from one person to another seemingly for no logical reason at all.” In the old days, a meme might have been considered a fad. For instance, squeezing twenty people into a phone booth might be a meme today—if you could find a phone booth, fill it with people, and take a picture of it.

Squidoo says that lolcats is the number one meme, as of this writing anyway, and it’s true that lolcats are hysterical. (I gave you the link, but don’t go visit it now or you’ll never finish reading this post; lolcats can keep you occupied for hourz.) If you peruse squidoo’s list of Top Ten Internet Memes, you’ll notice that there are no dog memes there. That’s because, at the risk of starting a flame war (look it up), dogs are not as popular as cats.

I have two cats, Boo and Scout. They’re not particularly funny cats, but the potential is clearly there, as evidenced by Scout, below, doing her impression of a ferret. 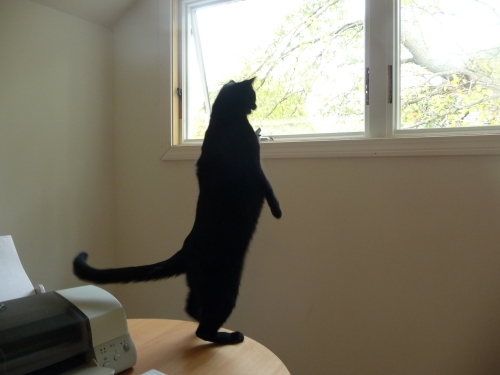 A couple of years ago, my husband shared a story from his job.  Someone had made the unforgiveable mistake of hitting reply all to a company email, thereby informing the entire company of his personal opinion. Immediately, the problem was compounded by many people replying to all that comments such as that should not be sent to everyone. Recognizing that this situation, which happens with alarming regularity, can cause normally sane people to become apoplectic, a clever employee tried to short-circuit the thread with his own reply all that included the photo below, and the subject line, “A picture of a cat with a pancake on its head.”

I discovered while writing this piece that the original animal sporting a pancake was actually a rabbit named Oolong. Again, according to squidoo, “The rabbit was famous for the ability to balance various objects on his head…The picture was made into an image macro – much like with lolcats – and frequently posted on various online forums. The caption said: “I have no idea what you’re talking about, so here’s a bunny with a pancake on its head.”” You can read Oolong’s complete history at Know Your Meme.com.

When memes spread “…from one person to another seemingly for no logical reason at all,” it’s called going viral, something I’ve been hoping my blog would do, but I clearly don’t have enough friends on Facebook to make that happen. Can you help? Share this with your friends. If they like it, maybe they’ll tell two friends about it, and they’ll tell two friends, and so on, and so on, and so on. Now that was a meme!