Cats don’t drool. That’s one of the reasons that cat lovers are not dog lovers. If a cat drools it is usually a sign that they are sick. You can read all about ptyalism (excessive drooling) in cats at PetMD. In short, it can be caused by a tooth or gum problem, or something harder to diagnose, a metabolic or gastro-intestinal disorder. Or, it could be the result of accidental poisoning. Harper, our not-quite-one-year old tortoiseshell, has been drooling.

It’s hard to say just how long Harper has been drooling, because it took me a while to realize that was what was happening. The first time a drop appeared on my arm while I was holding her I looked around wondering where it had come from. The next time I assumed her coat was wet; she likes to play in our shower after it’s been used. The penny dropped when I noticed several damp spots on my shirt after a prolonged cuddling session. So if cats don’t normally drool, what was going on?

For several months, Harper has been pulling pink insulation out of the ceiling in the basement. The embodiment of the curious cat, she’s been quite thorough in her exploration, and destruction, of the perimeter of the ceiling. The long term plan is to cover the exposed insulation. In the meantime, we try to make it harder for her, but she outfoxes us. She doesn’t eat the insulation, but it’s reasonable to assume that she licks fiberglass and who-knows-what-else off her paws. Her pursuit of insulation has been going on much longer than her drooling, however, so we don’t think it’s the cause.

Recently, she had been gleefully attacking the dried eucalyptus display in the downstairs bathroom. When bits of it appeared elsewhere in the house, we did a quick Internet search and discovered that eucalyptus is poisonous to cats. We threw it out and hoped we’d discovered the drool-inducing culprit. It’s been a couple of weeks, and Harper is still drooling.

Earlier, I said that drooling is usually a sign that a cat is sick—but not always. According to WebMD, a few cats will also drool when they are purring and very relaxed. So maybe we haven’t poisoned Harper after all! I started to check her chin when she wasn’t sitting on me to see if her drooling was indeed associated with purring. Below is a picture of her lying in one of her favorite spots. Despite a tiny bit of tongue protruding, there is no evidence of drooling. 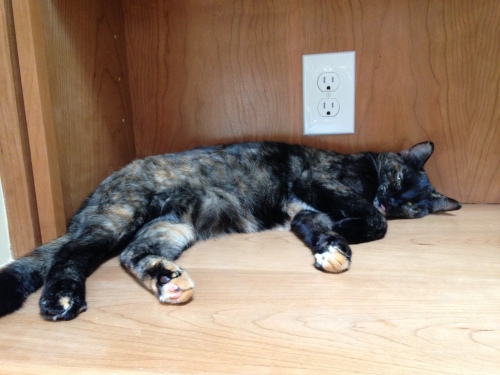 To put the above picture in context, and give equal time to Scout, here’s another photo: 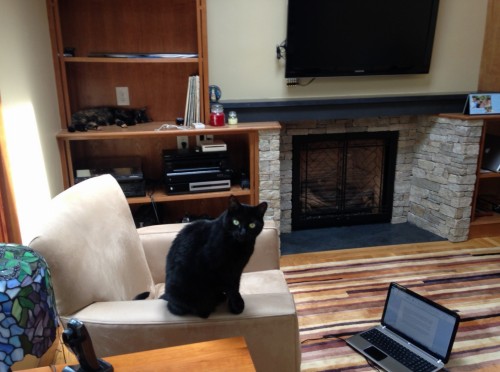 Despite this new-found evidence, I am not entirely convinced that Harper has happiness-induced drooling, so at the first sign of any other symptom I will whisk her off to the vet. And if it turns out that she is one of those rare cats who drool while purring, so be it. I’m willing to put up with a little dampness to have such a beautiful kitty favor me with her affection.

7 responses to “Poison or purring?”