Nadine was crying. She seemed desperate for attention, but when I approached, the volume increased. She shoved an arm through the bars of her cage, and then pushed her little snout through as well. It was harder to yowl that way, but she gave it her best shot. I reached out my hand and she pulled back her face and stuck her other arm through, grabbing one of my fingers with both paws. She might as well have been speaking English her plea was so clear. She must not have known that there was a small plastic card taped to the top of her cage that said someone is thinking about taking her home. On the other hand, maybe she knew that in an animal shelter the fat lady doesn’t sing until she’s walking out the door with her adoptee.

Our boy cat, Boo, had only been gone three weeks when Hannah and I dropped in at the Windham County Humane Society in Brattleboro, Vermont, on our way to celebrate Thanksgiving in West Wardsboro. We often visited the shelter, but with two cats of our own, we only stopped for a quick cuddle and then we were on our way. Now that Scout was the only cat at home, I knew we’d be tempted, but I thought we could risk a visit. After all, without Andrew we didn’t have a quorum. I didn’t count on Hannah falling in love.

We adopted Boo and Scout from the WCHS eight years ago, when Hannah was still a little girl. She was not happy about getting cats, but we assumed they would grow on her. Well, we underestimated Hannah’s powers of resistance. It took a very long time before she was comfortable with them; years. She did come to love them, however, and she was as bereft as we were when Boo died, but I never would have dreamed that she’d be the catalyst for our next pet.

It was late in the day, the day before Thanksgiving, and the shelter was winding down for the holiday. There were only a few kittens in residence and I didn’t pay much attention to them. I was more interested in the older cats. Hannah, however, zeroed right in on a kitten the shelter volunteers were calling ChaCha and it was love at first sight. There was no way we were going to be able to adopt that day; the shelter was closing and would not be open for the holiday. We knew, though, that if we wanted to adopt the kitten there was a good chance that she’d still be available—if we got there early enough—the day after Thanksgiving. Now all we had to do was talk Andrew into it.

Andrew took a little convincing. He felt it would be disrespectful to get another cat so quickly, even though he wanted Scout to have company. I didn’t entirely disagree, but Hannah’s excitement was hard to ignore. The case she built included her fear that if we waited until after she went to college to get another cat she’d feel as if she’d been replaced. (Better Boo than her, I suppose.) And she wanted a kitten, something small enough not to be intimidating. I was sold.

We told Andrew that he didn’t have to decide until he met the kitten. We knew she would close the deal, and indeed she did. So here she is, the newest member of our family, Harper. 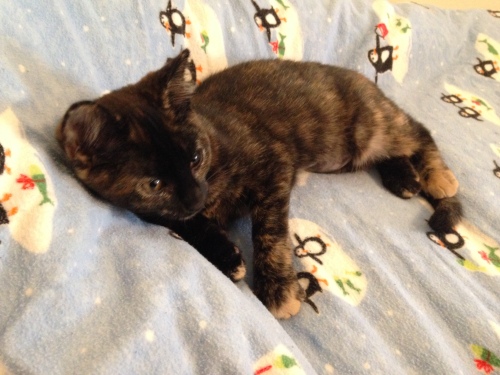 And it was a happy Thanksgiving for Nadine, too. She’s now in her forever home where I’m sure she’s making her new family very happy, just like Harper.

7 responses to “Who adopts who?”