I’d miss you if I knew you were gone

When I was three, we drove from California where we had been living, to Massachusetts where my dad was going to begin his medical practice. The story goes that my parents had promised us that we could have a cat “when we saw a house we liked.” After a long stretch of not much of anything, somewhere in Texas, my older sister called excitedly, “There’s a house! Do you like it? Can we get a cat now?” Alas, we had to wait until my parents settled us in our own house in Lexington, MA.

Sugar, which my father claims was short for meshuga (Yiddish for crazy), was a big tiger cat. I don’t know how he got his name since I remember him as long-suffering, placid and forgiving. He was the only male in the family besides my dad, and he was the apple of Dad’s eye. My father kept a picture of his daughters on his office bookcase, frozen in time, faded by the sun, confusing patients who would occasionally send home knitted slippers and other homemade presents for his “little girls.” The framed photo of Sugar, however, hung in a place of pride on his office wall and never faded.

Then along came Alvin Wickersham, our parakeet. Alvin lived in a hanging bird-cage, like the one pictured below, so he wouldn’t be a constant temptation to Sugar. It didn’t work very well, and it kept Alvin too high to entertain little girls unless they climbed a chair to look in. 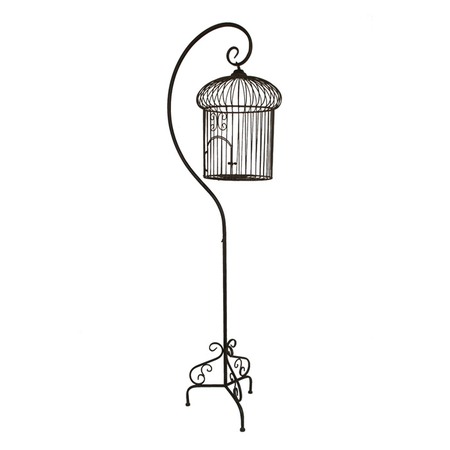 One day, after Sugar had managed to knock over the cage yet again, the door popped open and a terrified Alvin went zooming around the kitchen. In his panic, he hit his head on the wood valance over the kitchen sink. I have a vague memory of the poor little parakeet with blood on his head, but I may have painted the blood on in my mind. If he’d been a parrot, maybe we could have asked him questions like, “Who is the current president of the United States,” or, “What year is it?” to assess the damage. Lacking that diagnostic tool, my father made the best guess he could and declared Alvin not much the worse for wear, despite the bang on the head.

We three girls wandered off to continue living the life of little girls, torturing Sugar, and each other, and paying scant attention to our precious parakeet. Time passed, and I decided to check in with Alvin. I dragged the black, molded-plastic kitchen chair to the cage and clambered up to look inside. Alvin Wickersham was gone.

Before you blame my father for misdiagnosing Alvin, let me reassure you that for a people doctor, Dad made a pretty good vet. But that’s not really the point, because the fact is, I don’t know how much time passed between Alvin’s misadventure and his passing. It could have been days, weeks, or even months. The operative part of the story is that he was gone for several days before any of the sisters noticed.

Sugar probably noticed immediately, and may even have mourned the passing of his nemesis. I’m sure we girls were sad, too, for a while, until the birdcage was removed from the kitchen and then it was, again, out of sight, out of mind.

Sugar lived a good, long life. The day he died, we all cried, but no one more than Dad.

This entry was posted in Uncategorized and tagged Alvin Wickersham, pet parakeet, pets for children, tiger cat. Bookmark the permalink.