The curse of curly hair

I have curly hair. I married a guy with even curlier hair. My daughter was doomed. She has curly hair that makes her life hell. That’s what curls do to a girl. Left to its own devices, her hair arranges itself into layers of ringlets. At this point you may be picturing Shirley Temple and wondering what all the fuss is about, but bear in mind that my daughter doesn’t have a Hollywood makeup team slaving over her. Her curls are long and untamed, their length pulls them down, stretches them out; her hair is dark and frizzy, unmistakably ethnic.

You can’t look at her hair without feeling a primal urge to twine a ringlet around your finger. People always come up to her and say, “Look at those curls,” as they reach out to touch her head. When she was little, I didn’t think it would be polite to say, “Please don’t touch my child,” so instead I tried to explain to my confused daughter why stranger danger didn’t apply in those circumstances.

My daughter is handicapped by the fact that I grew up with no hair care training of my own. It was a time when everyone, men and women alike, had long wild hair. As a young woman, I looked like the character with the wedge-shaped hair in Dilbert. In a rash, fear-of-forty moment, I finally cut my hair short enough to take advantage of my curls. But it was even later before I learned about product, that generic term that applies to all sorts of goop you can buy to enhance your hair care.

When I was younger and people admired my hair, I would say, “Well, the grass is always greener on the other head.” When I was sixteen, my mother agreed to pay an exorbitant fee to have a salon slather chemicals on my hair to straighten it. I was transformed. I felt beautiful for the first time in my life. I went to a party that night and boys who had never given me the time of day swarmed like bees to honey. Over time the chemicals wore off and the curls crept back. I don’t remember if it was the money or the fear of damage to future generations that kept my mother from agreeing to pay to have it straightened again, but that was the only time in my life I had straight hair.

My daughter’s friends like to use their flat irons to straighten her hair, so for her birthday this year I bought her one. I thought we had both matured enough to work together to tame her curls. I was wrong. I merely introduced a tool that is not only difficult to use and bad for her hair, but can cause serious burns. One yelp was all it took before we agreed to abandon the effort.

My daughter is a beautiful girl, no matter how her hair behaves, but like all teenagers she’s more likely to listen to strangers than to me. For that reason, I’m eternally grateful to all the strangers who continue to reach out to touch and admire her hair.

*August 8 update. After reading this post, a friend sent me this photo with the note: “See the attached photo (taken at the MFA in the Roman section)  for proof of the longstanding popularity of curly hair.” 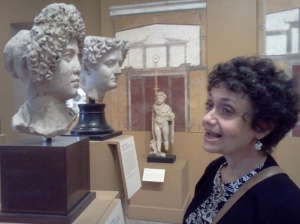 This entry was posted in Uncategorized. Bookmark the permalink.

6 responses to “The curse of curly hair”